I saw them in the morning, roaming the yard.  The bright white ball of fluff that is Phyllis.  The beautiful, and molting red lady, Peg Bundy.  They were grazing.  They were doing their best to stay out of the bitch’s way.  The bitch being L.L. Cool Hen.  She calls the shots in the yard, and plucks the feathers of anyone who goes against her reign.  Just hours later Peg was found lying headless and mauled in the back of the yard, and there was a trail of white feathers leading to the back fence where Phyllis had escaped or (probably) was dragged to her death (we can’t find her remains).  It was probably Black Cat.  Every day Black Cat creeps through our yard.  I don’t even know where he comes from, or who he belongs to.  But it may not have been him.  I’ve also caught Orange Cat back there before, terrorizing the girls.  I don’t think it was the neighbor’s dogs.  I’ve watched one of those pit bulls kill one of my chickens in the past (R.I.P. Lucy) and we would’ve heard that. 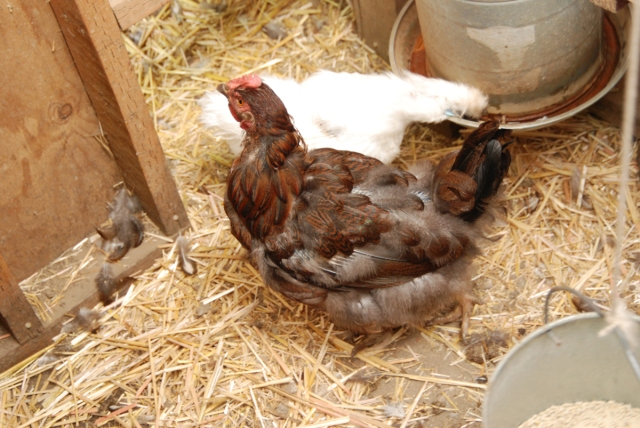 We got Peg as a chick along with L.L. Cool Hen and Leslie Snipes.  Anytime we get new chicks I always pick a red one and name her after a famous red head.  She had been molting recently and looked pathetic.  But when her feathers would grown back in, she was the prettiest bird in the yard.  She was often the noisy one in the morning.  I will go out there to see what all the fuss is about and nothing.  She would just be talking, making noise, wanting attention.  I’ll miss your bawking, Peg.

Oh, Phyllis.  Everyone loved Phyllis.  What’s not to love?  She was a pint sized ball of white fluff named after Phyllis Diller.  We adopted her from a blue haired lady a few years ago.  She was the cuddliest of the girls, and didn’t mind being held.  She also didn’t mind Diego.  In fact, they were kind of pals.  Whenever we refill the water or food in the coop, Diego would jump up in the hen box with Phyllis as if to protect her from the bitch.  He loved her.  We all loved her.  Phyllis, we’re going to miss your tiny eggs, and your willingness to be cuddled.

About 10 days ago I went out to the backyard to do the routine chicken check.  You know, make sure they have food, water and are happy little hens.  As I peeked into the coop I saw little Molly laying in the hay on the ground, lifeless.  It was about 8:30 a.m. so Rob wasn’t up yet and I was left by myself to wonder how she died.  It must’ve been natural causes or an illness that we were unaware of.  Phyllis, our one chicken left, is showing no signs of illness so we’re pretty sure Molly was just old. 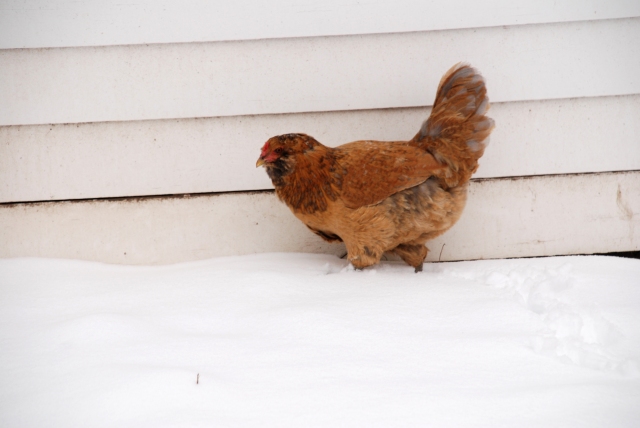 This was taken during Snomageddon ’07.  Molly was the only one of the bunch that would venture out into the snow.

We got Molly about two months after we moved in here.  We had Funky and she needed a friend.  Rob went to Foster Feed and saw her there on consignment.  He brought her home and she was ours.  We called her Molly because of her slight red headedness.  Molly Ringwald to be exact.  Molly was picked on at first by Funky (establish the pecking order).  When the chicks were added to the coop she and Funky teamed up to bully them.  Even though she gave them a hard time, Molly was probably the easiest going chicken we ever had.  She almost always let us pick her up, never really pecked at us and was even a bit of a celebrity.  Molly starred in the 3rd Floor‘s latest show Whiskey Powered Taco Fight and in a Hollywood Video training video.  I think she was also the first of our chickens to discover that if she jumped over the small fence we built to keep them in the back of the yard, she could jump on the deck then on to the patio roof and off the roof into her side of the yard.  It was always funny to see the chickens on the roof.  Molly was also one of the louder chickens.  Her squawking would often wake me up on the weekends long before I wanted.  I’d got out there to see if they needed food or water and they wouldn’t.  She was just noisy.  She was the one who in our 2007 Christmas card pooped all over me.  We’re surely going to miss her squawking and visiting us at the back door.  Rest well in chicken heaven Molly.

On a lighter note, we got three more chicks this week.  We’ll keep you updated on their growth as they will look more and more awkward as they go through the short lived chicken adolescence.