I was super eager to get my hands on this and turn it into something new for Max.  This little table and bench belonged to Rob’s mom, Sherri, when she was a little girl.  I assume Rob and his brother, Chris, used it when they were kids.

It’s made out of solid wood.  All I had to do was sand and paint.  And a little reinforcement on one of the legs.

It was already blue, which I liked, and decided to go with another shade of blue (Rustoleum’s Lagoon)  and a chalkboard top (leftover from Max’s room).  I went with spray paint because there wasn’t much surface to paint and I didn’t want to buy an entire quart and have a ton leftover.

For the bench I wanted to create a nicer seat so I padded it and covered it with laminated fabric that I found at Fabric Depot.  The laminated fabric is slightly different from oilcloth in that it’s not as thick, and not as glossy.  But it’s an easy to clean surface and the fabric was pretty great.  Although, even though I measured and wrote down my measurements, I failed to refer to them when having the fabric cut so it wasn’t wide enough to cover.  I had to cut it up and sew it in order for it to fit.  Yet one more lesson learned.  ALWAYS CHECK YOUR MEASUREMENTS. 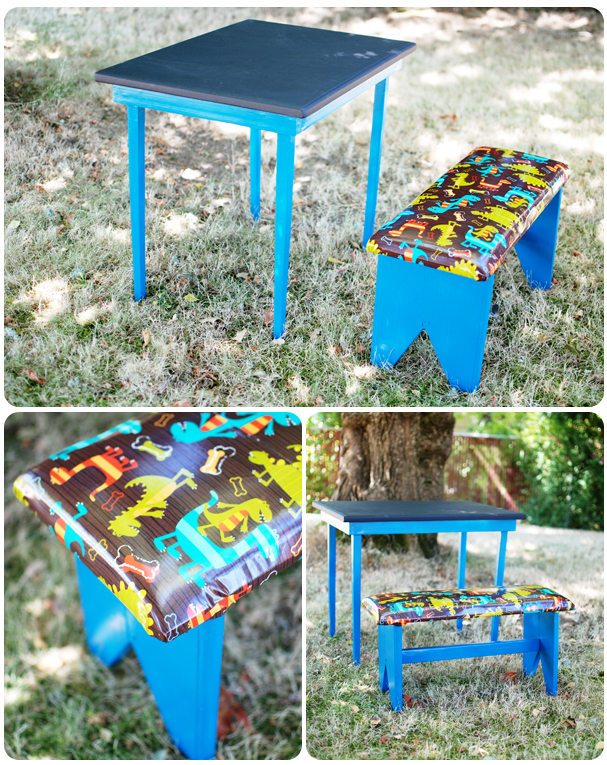 I’m pretty pleased with the end result.  Even the mismatched strips of fabric on the bench. 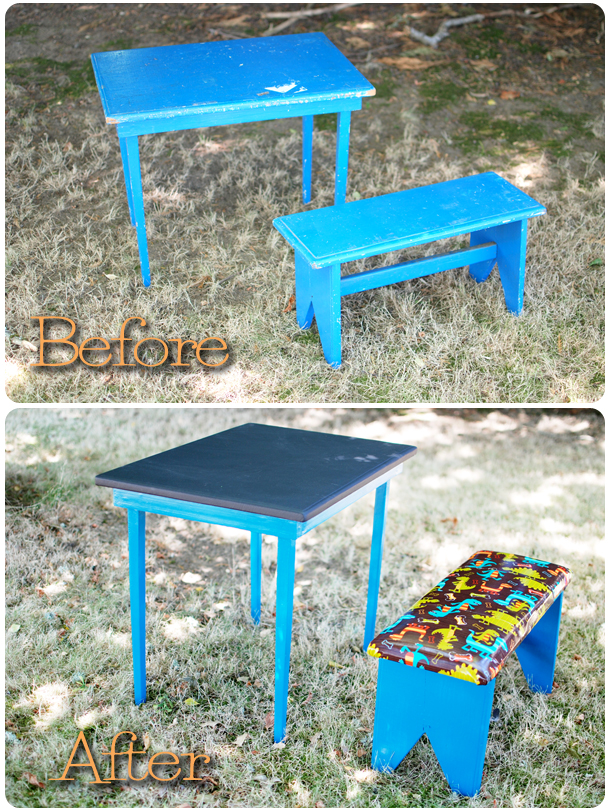 I had the table all set up for him yesterday when he woke up from his nap.  He was intrigued by the new thing in the living room.  So I sat him down with the crayons and drawing paper my mom got him and here’s how it went: 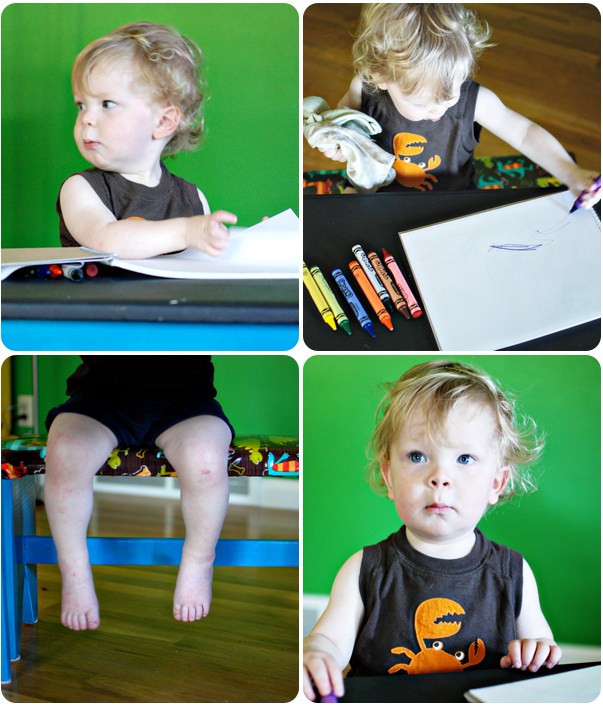 It’s still the norm for him to put most things in his mouth, but I made sure he didn’t.  He made some scribbles, Rob made some scribbles.  And Max sat there in a daze.  I know a lot of people think he’s still too young for coloring and finger painting, but this is one of the things I’ve looked forward to the most with him.  I don’t believe in age limits for art. I want him to grow up being able to express himself however he feels, and I’m just providing one more outlet for him to do so.

This is one of two chairs that have been sitting in the basement for years. It belonged to Rob’s parents and they didn’t have room for it at their new place so it became ours.

I had been thinking of what I’d like to do with this particular one for a while when one day it hit me. ORANGE.

Let’s start from the beginning of the process, shall we? 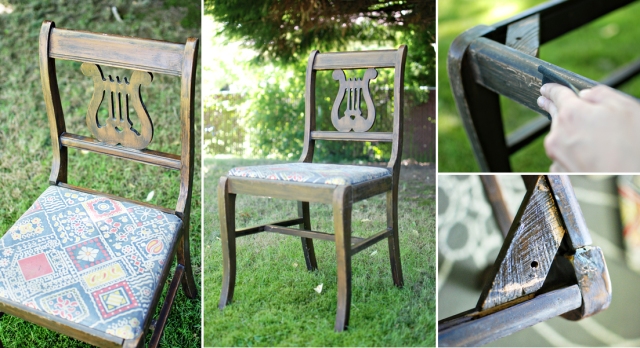 The seat was covered with the same, but extremely faded, fabric as the curtains in our bedroom. After I took the seat off I noticed that one of the corners wasn’t fitting quite right so I grabbed the wood glue and fixed it as best I could. Then came the sanding. I should’ve just used the electric belt sander, I would’ve gotten a smoother, more even end result. 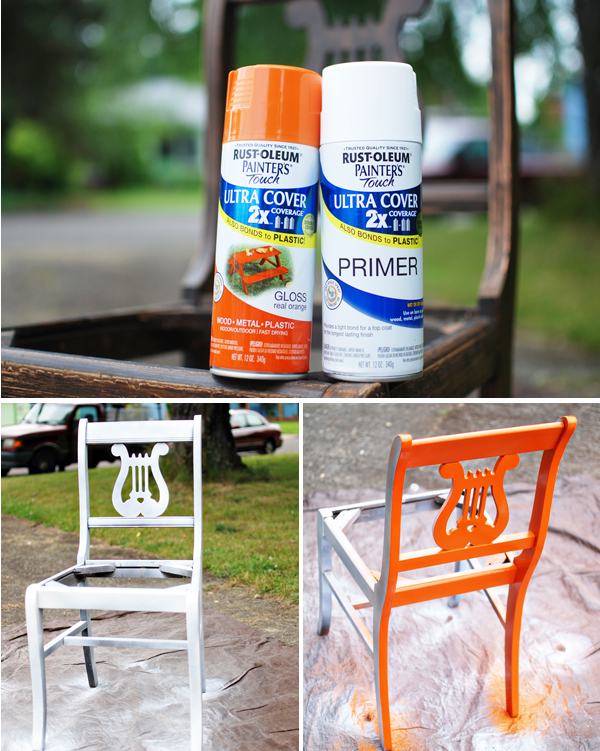 Now here’s the fun part, spray painting. I don’t know why I like it so much (it’s not the fumes, ya jerks). I primed it and painted it in the same afternoon. I actually had to go get a second can of orange.

The time between painting and upholstering the seat was about two weeks, because once again I can’t get a project done in a timely manner to save my life.

I found the seat fabric at Fabric Depot and had a 40% coupon so it only cost me about $6 for the 1/3 of a yard I got. I also got two other pieces of fabric I found in the scrap section and I’ve got some ideas for those which will hopefully come to fruition soon. While at Fabric Depot I also picked up some fancy ‘No Foam’ seat foam. I don’t know, it was all environmentally friendly and stuff, and I liked the way it felt, I think it was like $9. 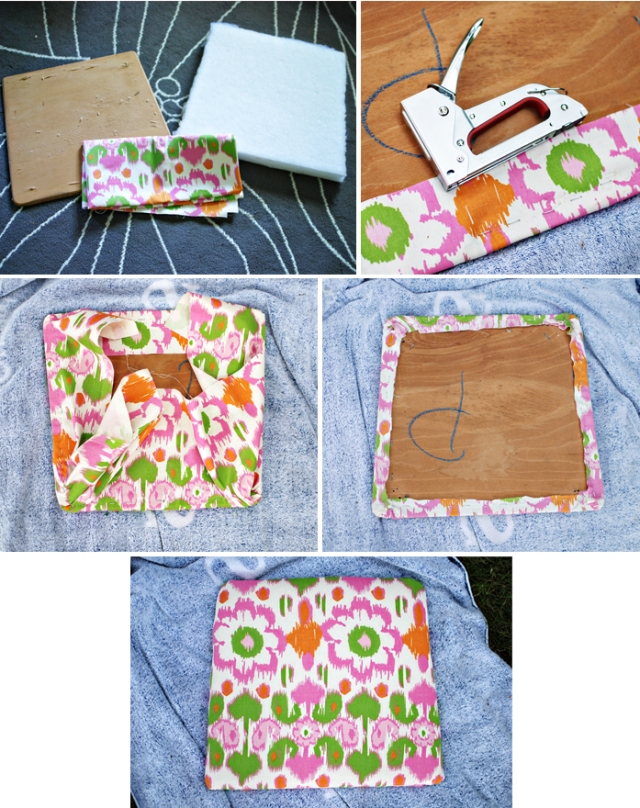 Cutting that foam down to size was a pain in my ass I tell ya. I almost sliced my fingers off only about 24 times. Once I had my foam cut I laid out my fabric and positioned it to where I wanted it to sit on the seat and cut. Now this next part was a pain for a few reasons. 1) All three of our staple guns were broken. 2) I couldn’t get the old staples out, they were embedded into the wood. 3) I’m afraid of staple guns and possibly shooting staples into myself (this may be irrational). I ended up buying my own staple gun that Rob is not allowed to use (even though he’s technically not allowed to use any of my tools, but I am constantly finding MY TOOLS in his workspace). I met my staple gun fear face to face and I’m happy to say I was unscathed in the end. Stapling the corners was a little tricky, and they do look a little sloppy but it’s my first time so I think it’s OK. I trimmed the excess fabric off the edges and I was done with my first upholstering project.

All that was left to do was to put the seat back on. So I did, and here’s the final product:

I know orange is a very harsh color, but holy cheese and crackers I love it.

This was so close to costing less than $20, but the purchase of the staple gun (which I’ll use many, many more times) and a second can of orange spray paint is what threw me overboard.

I’m thinking that it will eventually live in the guest room with a side table that I’ll get around to fixing up soon. For now she’ll be sittin’ pretty in the living room. 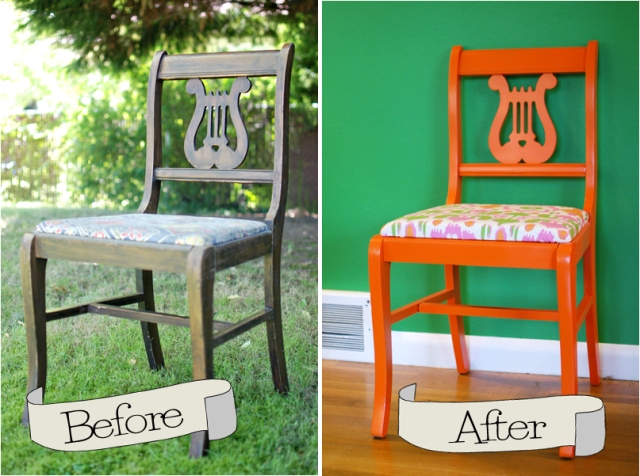 I picked up this vintage Stylaire kitchen stool at an estate sale a little while back.  I’d been looking for one for a while, because I fondly remember the one my Maw Maw had in her kitchen, and was pleased as punch to find this one for $10.  These suckers go from $50 to $300 on Ebay!

When I was thinking about how I wanted to change it up, I really liked the yellow and thought I would keep it yellow.  As for the seat I knew exactly what I wanted.  Fabric Depot (local fabric superstore of awesomeness) has a great selection of oilcloth and there was one in particular that always caught my eye when I was there.  I picked up half a yard during one of their super awesome weekend sales for around $6.  For the yellow, I just went to Home Depot and picked up a bright yellow spray paint in a glossy finish. 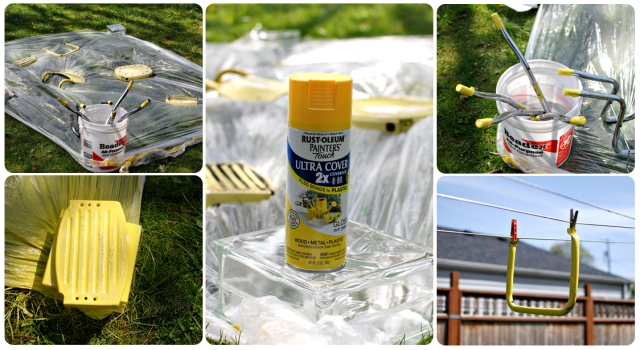 In order to paint the yellow parts I had to disassemble it.  For the most part it was easy, with the exception of a couple of stuck screws that required a lot of WD40 and one that Rob had to use a vice grip to get out.  I labeled all the parts as I took them off and taped off the chrome edges.

To paint I had to wait for a dry day, which those have been really hard to come by lately.  There was finally a dry day and I hauled everything out to backyard, laid it out on a plastic sheet and started spraying.  I quickly realized that having the pieces laid directly on the plastic was not a good idea, and I grabbed some glass blocks that were getting thrown out to prop the pieces up.  I was able to give everything a pretty good coating before Max woke up, but they still needed another coat.

The next step was to recover the seat.

Now, I’ve never reupholstered anything before so I wasn’t too sure how I was going to go about doing it.  The padding on the seat back was still in pretty good condition so I left it on there.  I just cut out a piece of oilcloth about two inches larger than the seat back, then wondered how I was going to attach it.  I decided duct tape was the answer.  Glue wouldn’t dry fast enough and wouldn’t give me the option to change positions, so duct tape it was.

The seat back went fairly quickly.  The seat itself, not so much.  The padding was destroyed and needed to be replaced.

I got some really thin batting from the craft store and cut it down to size.  Then I cut out the oilcloth and got to taping.

Looks really professional, huh?  I should get paid to do this.

Finally I was done and was able to put it back together.  And since I had labeled all the parts and separated all the screws, it was pretty easy.  Voila!

I’m super happy with the way it came out!  It was a fairly easy little project, and I’m sure it would’ve been done a lot faster if the weather would’ve cooperated.

This was my first time spray painting and upholstering anything.  I learned that there is a technique to spray painting and I don’t yet know what that is.  Before I use spray paint again I’m going to do some research on how to avoid things like drips.  As for the upholstering, I’m not sure I really had any other choice than to duct tape this.  My next upholstering project will be done by the book, whatever that book is.

Also, there’s a problem with the chrome, it’s spotted with stuff.  I don’t know what it is, and I’ve tried everything from regular household cleaner to Goo-Gone to baby oil to vinegar to get it off.  Anyone have any magic tricks to clean chrome?  Let me know please:)